She was being very courteous and patient, but I got the feeling that I was making her very uncomfortable by talking about topics that she was not here to discuss.

I got up early on Day 2 in Singapore. I was to witness the unveiling of the new cabin products that Singapore Airlines was to introduce on the A380 aircraft. The venue was packed with cabin crew. A lot of journalists grabbed the opportunity to take pictures with the Singapore Girl. The launch was well choreographed. But I guess that would be the case with most events in Singapore, which is a popular venue for such events.

Most of the products were for the higher end of the market. Economy packs the flights, but does not bring in the profits?

Members of the cabin crew — male & female — were posted at the various exhibits and were very patiently and most courteously explaining the new features to journalists.

It is a repetitive exercise. Hence, the praise.

When I got the opportunity to check out the suite, I also took a photograph.

But it was at the booth displaying the duvet in the Business Class that I entered into a conversation with one of the cabin attendants, I must add, in addition to my queries about the product.

We spoke about this being my first visit to Singapore and the places I could visit. I still did not have a plan. But, I knew what I wanted to eat. When I told her that I was considering a visit to 328 Katong Laksa in Queensway Shopping Centre, she asked why that particular outlet when ‘you can get laksa anywhere in Singapore’. I explained that celebrity chef Gordon Ramsey had taken on the chef at 328 Katong Laksa, and lost. She did not seem to be impressed. I felt a little unsure.

On learning where I was staying, she told me that Queensway is very far from my hotel. I told her that this would give me an opportunity to see a little more of the city than what I get to from the balcony of my hotel, or when I walk around in the Central Business District. Seeing the concern on her face, I changed the topic.

I told her that I was very impressed with the in-flight meal. And then, it struck me that meals on domestic flights in India are not equally good. I wonder why. Seeing her struggling for a response, I quickly added that I was just thinking aloud.

This was not going well.

I again changed the topic. I complimented the cabin crew and told her that Singapore Airlines attendants seem to have an air of calmness, serenity. It is very comforting on a flight. She took the complement graciously, but then I said: I wonder how they manage that! Again, she was at a loss for words, and said: ‘Maybe, it’s our training’.

This was getting worse.

She was being very courteous and patient, but I got the feeling that I was making her very uncomfortable by talking about topics that she was not here to discuss. I had to let her be.

She needed rescuing. But with none of her colleagues anywhere in sight, this mission fell upon me. I got into action quickly. I quickly held out my hand, thanked her, asked her name and bid adieu.

THAT was the time for a photograph. You should have seen the smile on her face. It stretched from one corner of the room to the other.

I wonder if I always make people feel this way!?! 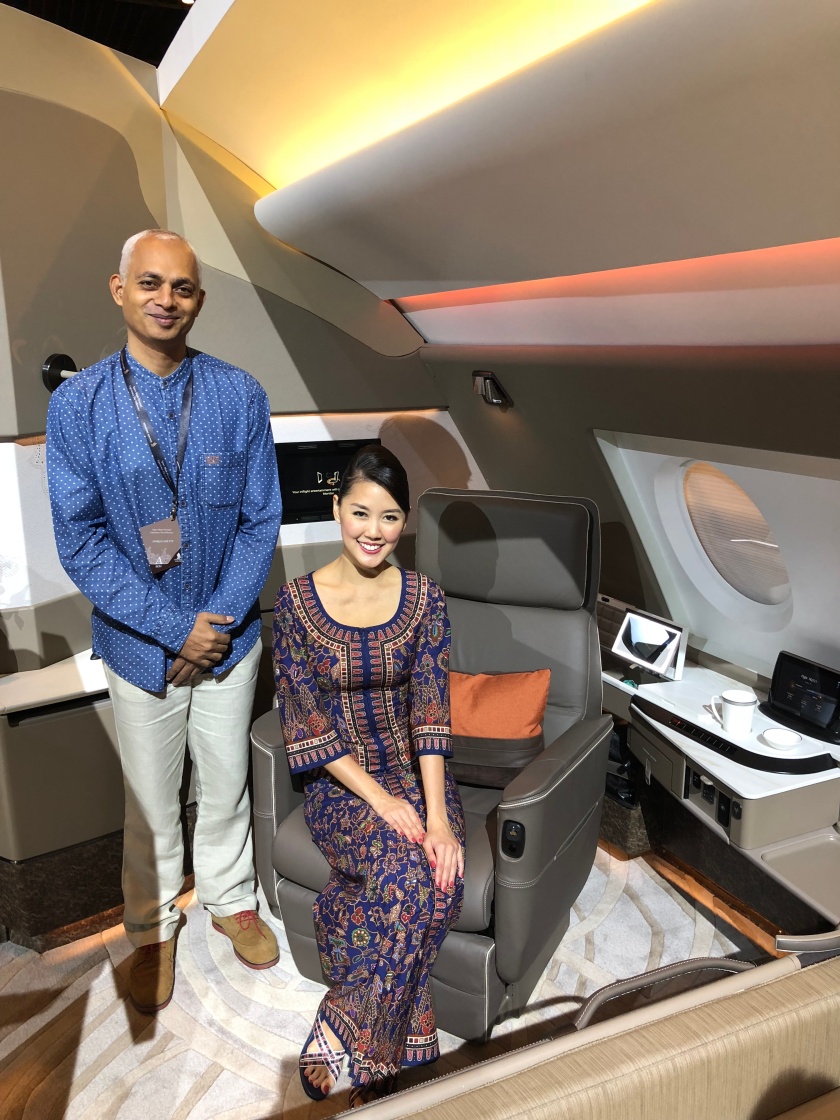 The only time I felt like taking a photograph was when I saw the re-designed suite for the A380. This was the closest I would ever get to a suite. And, this was not even in an aircraft. It was a mock-up.

I saw others taking photographs and was certain I didn’t want a photograph with me sitting in the suite with the Singapore Girl waiting on me. She would oblige out of professional courtesy like she did for many others, but I wanted something more realistic.

I mean, this lady and her colleagues would be flying all the time. Perhaps, attending to guests in suites. And, I am in the league of people who often stand on the ground looking up at the Singapore Airlines flying in the sky wondering when I would get to fly next.

A photograph of her waiting on me seemed preposterous.

So, I came up with this composition. This was my fan moment with the Singapore Girl.

I am a journalist based in Bengaluru. Every day, every moment, each one of us sees a different aspect of our home, the planet Earth, and its people. Sharing them enables others to indulge in our point of view. Star of Nowhere is my blog about my view of some interesting developments in the world. Could be on any development that piques my curiosity. Centre of South is about my experiences in travel and food. I relish local food and conversations with people in places I visit. I share some of my travel stories and about the food I try. Yea... I guess sometimes people do wonder why is this chap clicking pics of his meal! I would be happy to offer tips or guidance in south India. Most visitors to India are drawn by the Taj Mahal, which is one of the wonders of the world, and the forts of Rajasthan. I invite you to look beyond these two places, at south India. I will be writing about the interesting places in this highly developed part of India, where the people are better educated, enjoy a better standard of living as compared to the rest of India, have built a reliable network of roads and transport services, and can count on state-of-the-art healthcare infrastructure. South India is safer than any other part of India, and the gateway to south India is Bengaluru (aka Bangalore). Where do you want to go in south India? I would be happy to be of service to fellow travellers View all posts by Dhiraj Shetty

This site uses Akismet to reduce spam. Learn how your comment data is processed.